Food is irradiated to make it safer and more resistant to spoilage. Irradiation destroys insects, fungi that cause food to spoil, or bacteria that cause food borne illness. Irradiation makes it possible to keep food longer and in better condition. Food irradiation is an alternative to some chemical treatments in crop storage. It provides higher quality fruit from insect quarantine areas. Food Irradiation is not a cure-all for all food problems. Proper handling and storage by the food industry and the consumer are still important.

Most herbs and spices are grown outside, resulting in a large number of microorganisms, some of which could be hazardous to health. Herbs and spices also could carry insects or insect eggs. Because heat treatment can cause significant loss of flavor and aroma, a "cold" process is necessary. Most spices and herbs are fumigated, usually with ethylene oxide to destroy these contaminates. This fumigant is being phased out for environmental and health reasons. Irradiation is as effective without the environmental concerns of fumigants.

A very low-dose irradiation treatment inhibits sprouting of vegetables such as potatoes, yams, onions, garlic, ginger, and chestnuts, and can replace chemicals that are currently used for this purpose.

Grains that are insect free without the use of fumigants in storage. Low-dose irradiation can kill or sterilize all the developmental stages of insects pests in grain. Dried fruits, vegetables, and nuts are liable to insect attack, and some cannot be effectively disinfected by chemical or physical means other than irradiation.

Food irradiation leaves no protective residues, so proper packaging is needed to prevent recontamination by insects or microorganisms.

High quality tropical and semitropical fruit from the Mediterranean fruit fly or other pests quarantine areas. Irradiation disinfestation can increase trade in certain tropical fruits, such as citrus fruit, mangoes, and papayas. Food irradiation offers a residue-free means of preventing the importation of harmful insects, such as the Mediterranean fruit fly. Irradiation treatment offers an alternative to fumigation to satisfy the quarantine regulations in a number of countries.

Food irradiation makes food safer by destroying microorganisms that can cause food poisoning and parasites that can cause disease. At low-to-medium dose levels, food irradiation kills Salmonellaand Campylobacter. These bacteria are common in poultry and can cause human gastrointestinal disease via the poultry itself when it is not thoroughly cooked, or through cross contamination of other foods in the kitchen. Irradiation also destroys E. coli 0157:H7, a highly virulent bacteria responsible for illness and death and other pathogenic bacteria. 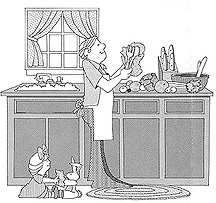 Food irradiation also kills other bacteria that cause disease as well as the parasite Trichinella spiralis found in some under cooked pork which can lead to trichinosis in humans.

Meat safety has received increased attention following the 1993 outbreak of E. coli O157:H7 infection. According to the Centers for Disease Control, E. coli is estimated to cause 62,458 illnesses, 1843 hospitalizations and 52 deaths yearly.

The United States Department of Agriculture (USDA) has mandated ground beef microbiological sampling procedures, and new handling procedures. Health professionals and the food industry are examining several processes which can improve the hygienic quality of animal products, including food irradiation. Irradiation can serve as a pasteurization treatment for solid foods like meat, just as heat pasteurizes liquid foods, like milk and juice.

Food irradiation is not a cure-all for all food problems. Proper handling and storage by the consumer are still important.

Because irradiation destroys disease-causing bacteria, the process has been used by hospitals to sterilize food for immune-compromised patients and it is used by astronauts in space when food borne illness would be a significant inconvenience.

What is Food Irradiation?

What is Food Irradiation?

How does Food Irradiation work?

How do irradiated products taste?