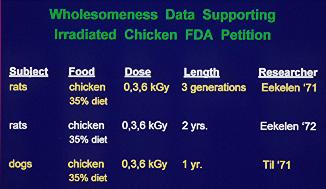 Irradiated food can safely be consumed by anyone. In fact, irradiated poultry, meat and seafood (where approved) are recommended because of greater safety.

Scientists acknowledge that nothing can be proven safe, rather, scientists develop scenarios to test safety. Irradiated food has been fed to multiple generations of laboratory animals and to human volunteers with no ill effects. Respected national and international organizations, such as the American Medical Association and the World Health Organization, endorse the safety of irradiated foods. Some health professionals recommend irradiated foods for people who want the safest food. 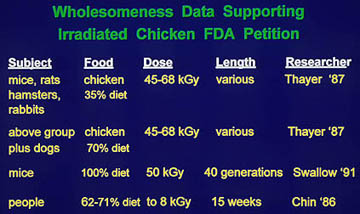 Scientists from the Food and Drug Administration, U.S. Department of Agriculture, as well as from many universities reviewed several hundred studies on the effects of food irradiation before concluding that irradiated foods are safe. This summarizes some of the studies when irradiated food was consumed by a variety of subjects. No ill effects were observed.

Like other methods of processing, food irradiation causes small chemical changes which produce new substances called radiolytic products. These are measured in parts per billion and can only be detected with sensitive laboratory equipment. They are identical or similar to substances that occur naturally in food that is not irradiated and have been shown to be harmless in the amounts produced.

Despite extensive research, there is no evidence that irradiated foods present any increased risk of exposure to harmful substances over conventionally processed foods.

How is Safety Tested?

Does Nutritional Value Change After Irradiation?

Are There Hazards with Food Irradiation?