Research on food irradiation dates back to the turn of the century. The first U.S. and British patents were issued for use of ionizing radiation to kill bacteria in foods in 1905. Food irradiation gained significant momentum in 1947 when researchers found that meat and other foods could be sterillized by high energy and the process was seen to have potential to preserve food for military troops in the field. To establish the safety and effectiveness of the irradiation process, the U.S. Army began a series of experiments with fruits, vegetables, dairy products, fish and meats in the early 1950's.

In 1958, Congress gave the FDA authority over the food irradiation process under the 1958 Food Additives Amendment to the Food, Drug, and Cosmetic Act. Research has included toxiological and microbiological evaluation, as well as testing for wholesomeness. The FDA has approved food irradiation processes for wheat, potatoes, pork, spices, poultry and fruits and vegetables and red meat.

Food irradiation was recognized by the United Nations which established the Joint Expert Committee on Food Irradiation. Their first meeting was in 1964. The committee concluded in 1980 that "irradiation of foods up to the dose of 10 kiloGrays introduces no special nutritional or microbiological problems." In 1999, the World Health Organization determined the dose limitation at very high dose is palatability, not safety. Irradiation should be considered parrallel to cooking in all aspects of safety.

The Food and Drug Administration gave permission for the expanded use of irradiation in the U.S. food supply in 1986. 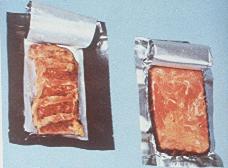 Astronauts and cosmonauts eat irradiated foods whenever they are in space.

The Food and Drug Administration long ago authorized the use of irradiation to sterilize hospital equipment, disposable medical devices and other medical supplies, the use of x-rays and gamma rays to inspect food, and the use of ultraviolet radiation to control the growth of surface microorganisms and to sterilize water used in food production.

Why should I care about irradiated food?

What Foods Can Be Irradiated?